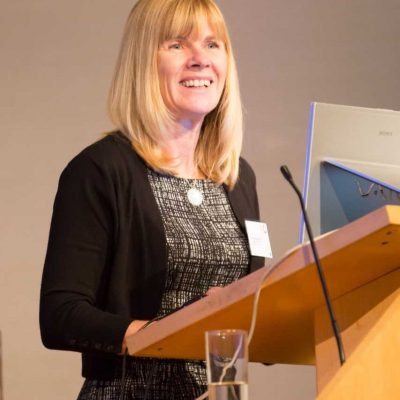 After leaving university with a PhD in environmental engineering I worked for an environmental consultancy for two years, before completing a Teaching English as a Foreign Language course; I then taught English to scientists, engineers and doctors.

After several years I decided to return to environmental science, and use my teaching skills in that setting.  I subsequently was appointed as an environmental coordinator for a local council. I continued to work part time when I had my first two children. However, after my third, and youngest, child was born in 2005 I decided to stay at home and take a career break.

Shortly after that my youngest son, Ben, was diagnosed with autism. Like most other parents I had heard of the condition but had only a vague idea of what it was and in common with all parents of an autistic child I was hungry to learn more.

In 2010 I spotted an advert for a job as a research associate in the Institute of Neuroscience at Newcastle University. I knew immediately that this was the job for me and as my children were now older and more independent, I leapt at applying.

Although I had a research background, albeit in a different field of environmental engineering, I was confident that I could do the job with enthusiasm, commitment and compassion. However, I didn’t even get an interview, despite my previous sixteen years research experience. The rejection left me feeling deeply disappointed.

I then contacted a lead researcher at the project I had applied to work for and enquired how could I improve my chances of getting a job. He suggested that I volunteer with a group of autism researchers so I started going into the University one day a week as a visiting researcher. After a year, I was more convinced than ever that this was the area of research I’d like to pursue. Whilst at Newcastle University, I first heard about the Daphne Jackson Trust and the retraining Fellowships offered by the Trust.

I knew I needed a comprehensive retraining programme to transition between the two research areas, and that’s what the Fellowship offered me along with the opportunity for part-time working and flexibility to continue looking after my family’s needs.

I was thrilled to be awarded a two-year Daphne Jackson Fellowship to be hosted and sponsored by Newcastle University.

Since my Fellowship ended in 2013, I’ve worked closely with researchers at Newcastle University on a number of different autism related projects.

My Fellowship has definitely led me to becoming an employable researcher. I’ve now successfully transitioned from the field of environmental science to neuroscience, as well as increasing my understanding of autism. I now work a four-day week at Newcastle University where I lead a research stream which is investigating the use of virtual reality to help children and adults with autism to manage their anxiety. My desire to make a contribution to this field of research, and my commitment to improving the daily lives of children with ASD, is paramount.

Last year I was honoured to be included in the Timewise 2017 Power Part Time List and was honoured with the ‘Ones to watch’ award in the 2017 Timewise Power Part Time Awards (an annual scheme set up to recognise the UK’s top 50 people who work in senior roles, all on less than five days per week). I’m glad that by opening up about my own personal working patterns, I can help pave the way for future generations of workers who need to fit work with other major commitments in life.