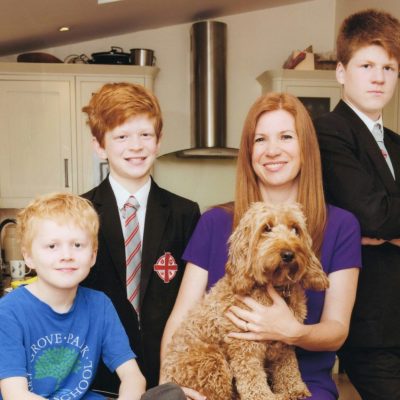 I’d love to tell you I had a glittering career before my three boys came along.  But I can’t, because I was an actor. Given that only 3 out of every hundred actors are in paid acting work at any time, this meant I did lots of promotion work to pay the bills, along with some actual acting.

Anyway, it became very clear when I started having babies that this was not a ‘career’ which was easy to combine with children. I simply didn’t earn enough to cover the childcare, and acting hours and auditions are not regular and so are difficult to plan for.

In any case, I wanted to look after my boys myself. Actors are after all people who are paid to play for a living, so I was in my element on the floor engineering elaborate train networks or chasing them around the house pretending to be a monster. As they got bigger, I became heavily involved with their schools, and am currently a governor at both primary and secondary level.

But increasingly I yearned for the career I’d never had. I’d studied English Literature at university and had been torn between acting and journalism: both hideously competitive professions. At 48, and having been home for 15 years, I thought I had no realistic chance of becoming a journalist.

And then I saw a tweet from The Spectator magazine. They were looking for (paid) interns and didn’t want CVs; just to see what you could actually do. I knew this was my chance because they wouldn’t know my age, or that I’d been at home for years. I wrote about politics and economics and sent it off with a covering letter saying I was ‘different’ and ‘older’.

Getting the internship has transformed my life. The Spectator published an article I wrote about being an older intern and it became their 12th most read piece of last year. The Sunday Times did a feature on me, I led the Evening Standard Diary (above George Clooney!) and was back and forth to the BBC, doing interviews for Radio 4’s The World Tonight, 5Live’s Pienaar’s Politics, World Service Weekend and then BBC Breakfast with Dan and Louise. The whole experience was wonderful, scary and surreal.

I hadn’t realised that starting again was that unusual and certainly hadn’t expected the commotion I caused. But why ever not start over? Given we will soon be working into our seventies I could have a thirty-year career. I couldn’t care less that being an intern means you are ‘starting at the bottom’ (though I suspect that interning at The Spectator is more like starting at the bottom of the top!).

The Spectator have given me lots of help and support, and I absolutely loved working there. I didn’t feel odd being older, and everyone was lovely to me. I’ve been back there since to help with the Christmas rush, and they’ve now published five articles I’ve written. I also did an internship in News at The Sunday Times. Again, everyone I met was positive, encouraging and helpful. I had four by-lines in two weeks.

So now I am making my way as a freelance journalist, often writing at home, and getting experience working at different organisations. For now, this suits me – my family are still adjusting to my working and my eldest son is about to take his GCSEs. But after that I want to work full-time as a journalist, going into an office and being out and about meeting people.

I’ve joined a fantastic organisation called Women in Journalism and have been accepted onto their mentoring scheme. Other women in the industry are an invaluable support network, and I’ve already met several fabulous and inspiring female journalists.

If someone had told me a year ago that I’d be published in The Spectator and The Sunday Times, and that Kate Adie would introduce me on Radio 4’s From Our Own Correspondent, I would not have believed them. I can barely believe it now. So, my advice would be: just go for whatever you want to do. However unlikely or impossible it might seem, you never know what may happen.