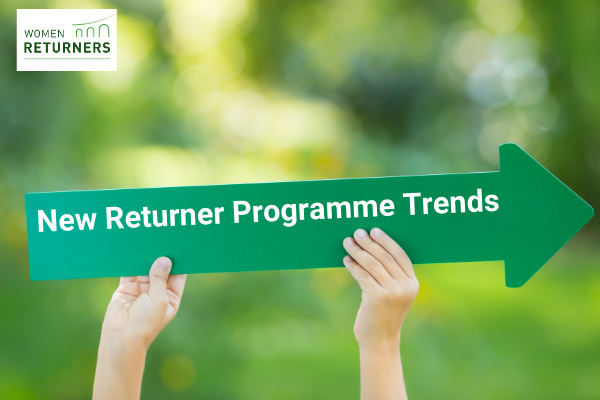 Are you an employer interested in learning how returner programmes and general returner hiring has evolved over the last 5 years? Read on for trends in returnships, supported hiring and returner retraining initiatives.

In the last 6 years, the returnship market has rapidly accelerated in certain countries. In the UK, numbers grew from 3 programmes in 2014 to 53 returnships across 83 employers in 2019, in a wide range of sectors including telecoms, tech, media, local and central Government, legal, investment management, insurance, consulting, transport, engineering and construction. Returnships also grew rapidly in the USA and India, with pockets of growth in smaller countries such as Ireland and Switzerland. After an unsurprising downturn during 2020, programme launches are picking up again in 2021 and we’re hopeful that the upward trajectory will resume post-pandemic.

As with anything new, returnship design has been a process of learning and improving. At Women Returners, we’ve evolved the structure of our partnership programmes to increase the likelihood of success for returners and the business, and have looked to create new formats to widen the applicability and scope of opportunities.  Here’s a recap on what we mean by a returnship, followed by a highlight of a few of the new trends.

Recap: What is a Returnship?

A returnship is a professional-level, competitively-paid placement for 3-6 months, with a strong possibility of an ongoing role at the end of the programme. Effectively, it’s a higher-level internship specifically designed for returning professionals. As part of a returnship, participants will receive extra support to help them to get up to speed as quickly as possible. That typically includes a buddy to help them settle in and navigate the team and systems, training to help fill any knowledge gaps and an internal mentor to help them understand the broader organisational context and be a valuable sounding board. Coaching is also often provided through the transition period: our Career Returners Coaching Programme supports returners throughout the returnship to help them to prepare for their return, weather the inevitable emotional and practical ups-and-downs as they transition back, and proactively manage the returnship to maximise the chance of an ongoing opportunity. Most returnships run annually with a cohort joining together on a fixed date.

Importantly, the first two changes have led to much higher post programme retention rates in recent years. We’ve seen the conversion rate to ongoing roles rise from about 50% to closer to 80-100%, as programmes are increasingly structured with this longer-term perspective.

A growing area has been the development of cross-company returner programmes: a number of employers in a similar geographic location, and usually in the same sector, join together under an umbrella returnship programme. We’ve run cross-company programmes since 2018 in the financial services sector, in professional services, in law and in the savings and investment sector. It’s an exciting new development as it enables organisations with smaller-scale recruitment needs, or who want to test out the concept, to run a programme. Employers get to share learnings and costs, and to collaborate to increase sector-wide diversity in recruitment.

One UK example is The Diversity Project Cross-Company Returner Programme, now in its second year. This is a returnship across firms in the savings and investment sector. We’re leading the programme in partnership with the Diversity Project, an employer-led body. The 2020 programme was really successful, despite Covid uncertainties and virtual working, with an 82% conversion rate into ongoing roles. Participating organisations have increased from 5 to 8 leading employers for 2021.

We’re seeing a new returnship format emerging – we’re calling it a ‘Rolling Returnship’. In this case, the returnship runs on a rolling application basis throughout the year, with returners joining individually at various dates to suit the business needs. This makes it easier for employers to offer their BAU (business as usual) roles, which come up ad-hoc during the year, to returner applicants.

With a rolling returnship, returner candidates may be invited to apply for all jobs in the open market or for a selection of roles identified as suitable for people on career break (e.g. where up to date technical/business knowledge isn’t required). Returners may be in competition with non-returner candidates, or certain roles may have been ringfenced for returners. They will join on a placement, as with a fixed date returnship, with support on an individual rather than a cohort basis (although maybe with a returner buddy as mentioned above). See the programme with Mazars for an example.

What do we think about these trends?

Part of our mission is for returner programmes to become a normal part of an organisation’s wider talent strategy, so continued innovations like these are essential to broaden the potential of the return to work market. Both rolling returnships and cross-company programmes are an exciting way of opening up more opportunities for returners. The key consideration is that they are structured to work effectively for both the business and the participants, including recognising and lowering the hiring barriers that returners encounter.

Recap: What is Supported Hiring?

We created the term “Supported Hiring” in 2015, to describe the process of bringing returning professionals directly into permanent roles with a wrapper of transition support. Supported Hiring can refer to ad-hoc roles or a structured annual programme. When a returner joins in a Supported Hire role at our partner employers, they will receive our Career Returners Coaching Programme, typically delivered 1:1, to give them essential support through the first 5 to 6 months in the role. Larger employers may also offer a buddy, an internal mentor and training to help fill any knowledge or skills gaps due to the career break. See Career Returners at Allianz for an example.

There are several differences from a returnship (where you join on a fixed-term contract with a strong possibility but not a guarantee of a permanent role). These aren’t pros or cons of one format versus the other. They’re just different, and the best fit for an employer or an individual will depend on organisational circumstances or personal preferences:

We’re excited to be having more conversations with returner employers about evolving Supported Hiring to become an integrated part of mainstream hiring. This is a larger-scale, longer-term aim. It involves not only a change in recruitment and advertising processes, but also the widespread reduction throughout the organisation in the hiring bias towards people without recent experience. However we are encouraging this ambition as a way to massively scale up returner hiring and achieve our goal of making career breaks a normal part of a 40-50 year career.

Read our returner programme success stories to hear from participants themselves about their experiences. Some examples of supported hires are Kseniya at AWS,  Fiona at UBS and Belinda at Clark Holt

What are Returner Retraining Programmes?

Returner Retraining Programmes are run by employers and include a combination of paid work and study, rather than being purely a training course. Although some are newly created, they are usually variants of existing company training programmes, originally developed for graduates or career changers, and adapted for and targeted at returners.

The structure of these programmes varies. With some programmes, participants start in a job from day one, combining work with on-the-job training and study. With others, participants have an initial 2-3 month training course followed by an 9-24 month work placement. They may also receive coaching or mentoring support, although this is less common than with a returnship or supported hiring.

Some retraining employers are looking for people with specific transferable areas of experience, such as professional services, whereas others have a broader target and are more interested in assessing potential through candidate skills and attitudes.

Although graduate training programmes have existed for a long time, retraining programmes aimed at returners have only developed in the last few years. Numbers remain low but are steadily growing. The majority of UK returner retraining programmes to date have been in 2 sectors, tech and investment management. The employers launching these initiatives have skills gaps to fill and are also keen to improve diversity. They are starting to target returners as they recognise the value of the transferable skills, business and life experience and maturity that returners can bring. They see the potential and expect that their careers will accelerate quickly after the training.

Within the UK, the apprenticeship levy has made it attractive for larger employers to develop the retraining programme as an apprenticeship, meaning that many recent programmes are structured this way. To meet the Government criteria, they have to last at least a year, participants have one day a week to study with an external training provider, and receive a recognised qualification at the end.

The combination of skills/diversity drivers and the apprenticeship levy has driven a lot of interest in the concept of returner retraining and we expect the number of initiatives will increase over the next few years, particularly as broader awareness of the returner talent pool continues to grow. As with other returner initiatives, we may also see expansion into other geographical markets.

Read our returner programme success stories here to hear from retraining programme participants themselves about their experiences. One example is Rebecca at St. James’s Place Academy.