How to avoid living with regrets 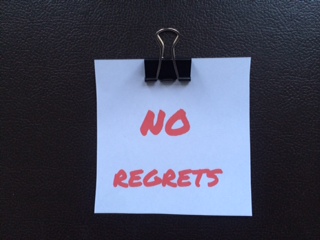 Any of these sound familiar …?

On top of guilt, regret about past actions or choices can be another way in which we endlessly beat ourselves up.

Fear of future regrets can also stop you from making important life decisions. If you’re thinking about going back to work, you might be worrying that you will regret spending less time with your family, or alternatively if you’re considering taking a career break, you might be afraid of regretting ‘giving up’ your career.

How can we manage regret? A good start point is understanding more about why it exists and what is most likely to trigger it.

Psychology of Regret
Regret involves blaming ourselves or feeling a sense of loss about what might have been. Like all negative emotions, it exists for a reason. Regret is useful if it encourages you to re-evaluate your past choices and then galvanises you to refocus on what’s important or to take a different path. Regrets can be a call to action – pushing you to pick up your career or to spend more time with people who matter to you. Neal Roese from Kellogg University, who has studied regret among younger people, found that overall they see regret as positive as it motivates them to make changes. You can also be encouraged to take action by fear of future regrets: one of the factors that strengthened my decision to retrain in my 30s was that I knew I would regret it if I didn’t give it a go.

However, there is a powerful potential down-side. If you have limited opportunity to change the situation, which is more likely as you get older, regret can be destructive – leading to self-blame, frustration, an inability to make decisions and sometimes even to stress and depression.

Our greatest regrets
Thomas Gilovich at Cornell University spent a decade studying the psychology of regret, mainly by asking people to look back over their lives and to describe their biggest regret. Over the long term, 75% of people regretted not doing something more than the actions they had taken, even those which had led to failure and unhappiness. The top 3 regrets were not working hard enough at school, not taking advantage of an opportunity and not spending enough time with family and friends.
Psychologist Richard Wiseman explains the rationale. It’s far easier to see the negative side of a poor decision you made than the consequences of something that didn’t happen. You can see the tangible results of making a bad career decision on your life now. However, if you didn’t accept that job offer, then the possible positive benefits are endless and it’s easy to fantasise about the great life you would have had if only you’d made the right decision at the time.

How to tackle regrets

If you have regrets about actions you took or didn’t take in your past:

If you’re worrying about future regrets from actions you want to take now:

Refs & other reading
59 Seconds, Richard Wiseman. One of my favourite books on how psychology research can change your life, including a chapter on regret
The Psychology of Regret. Online article in Psychology Today
Prone to procrastination – tips to help you move forward. Another blog post
Posted by Julianne