Do all working mothers have to feel guilty? 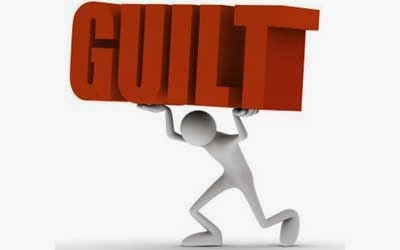 “Since I returned to work after my career break I feel guilty every day. Don’t all working mothers?”

Listening to this comment from a guest speaker at an event for women returners and seeing the nods of agreement in the audience, I was not surprised that many women decide not to go back to work even if they are feeling unfulfilled as full-time mothers. Who wants to sign up to years of feeling guilty?
Do all working mothers feel guilty?The premise that a heavy burden of guilt is the lot of the working mother seems to be fairly ingrained. Not a week goes by without some mention in the media. And we are just talking about working mothers here, no-one talks about ‘working father guilt’. Just recently …

I’m starting to feel guilty for not feeling guilty. As one of the 2 in 10 working mothers who don’t feel guilty, is there an implicit assumption that I don’t care enough about either my work or my family (or both)?

It’s worth looking at guilt from a psychological perspective. What is the function of guilt?
“From a cognitive point of view, guilt is an emotion that people experience because they’re convinced they’ve caused harm. The emotion of guilt follows directly from the thought that you are responsible for someone else’s misfortune, whether or not this is the case.” Psychology Today

So guilt is not a consequence of caring. Healthy guilt is a sign that our conscience is working effectively and can be a useful emotion if it’s telling us that something needs changing. If guilt is a warning flag that our actions might be harming our children or our co-workers, then it’s served its purpose. But feeling guilty doesn’t make you guilty. Working can have a positive effect on family life (see previous post). Often guilt comes from judging ourselves by impossible standards (back to the Perfect Mother and Employee) or being influenced by the perceived judgements of others. In this case, it’s a destructive emotion that we are allowing to reduce our life satisfaction for no reason at all.

How to challenge guilt feelings when you are returning to work

Analyse the cause of your guilt feelings. Is the emotion telling you that you are making a decision that is inconsistent with your values? Do you rationally think that you are jeopardising your relationship with your family? If so, are you able to reduce your working hours, to shift your work pattern or to work from home some days? Do you need to think about a job or career change to get more flexibility?

If you consider your choices and the trade-offs you are making and do not want to make any changes (or are practically unable to do so), then recognise that guilt is serving no useful purpose and let go of it. Guilt is not a badge of pride for working mothers, just a rod we have created for our own backs.