Are ‘shoulds’ ruling your return-to-work decisions? 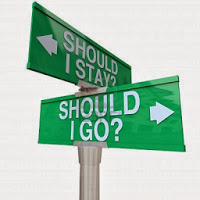 I co-ran a workshop for INSEAD alumni last week on getting past the internal barriers that can keep us stuck when we want to make a career change: our fears, beliefs and ‘shoulds’. We’ve talked previously in this blog about fear of being selfish, fear of failure, and guilt. And we’ve touched on the limiting beliefs that can unconsciously hold us back, such as “there aren’t any good part time jobs out there” or “I’m too old to go into something different“. If you’re feeling stuck, there may be another mental trap you have set up for yourself without realising it – your ‘shoulds’. Do you recognise any of these …?

When we say ‘I should’ we don’t always mean “I want to” – we may just feel a pressure to behave in a certain way. It helps to understand the psychological basis for this. As we go through life, we develop certain values based on repeated messages we’ve received from other important people in our lives*. Often it’s from our parents, sometimes it’s our teachers, or it may be friends, or respected colleagues. If our father tells us enough times that we ‘shouldn’t waste our qualifications’, this can become an implicit rule that we live our lives by without questioning whether it is a choice that we ourselves want to make. These inner ‘rules’ can unconsciously keep you unhappily at home (or drive you reluctantly back to work) or stop you from changing to a more satisfying job when you do return to work.

Our values can be influenced by where we are living or the society we have grown up in. One of my clients, Isabelle, a French accountant, was full of guilt for taking a career break. Isabelle’s mother had been a ‘career woman’ who had told her that “women should earn their own money” and all her equally well-educated friends in Paris were working mothers and could not understand why she had not returned to work. She felt a push to return to a prestigious job even though she was concerned about not having enough time for her family: “I should be using my education” was how she put it. Another client from Germany faced a different set of cultural norms; Karin wanted to return to work but felt pressured into staying at home because it was the expectation in her town that mothers of primary-age children did not work. As she explained, “I feel it should be enough for me to be concentrating on raising my children”.

It’s worth listening to what you’re telling yourself or other people when you’re debating returning to work. We’re often not aware of the difference between our ‘shoulds’ and our ‘wants”. Next time you find yourself saying “I should” try changing it to ‘I want to’ or ‘I choose to” and see if it is still true. If you realise that this is not your choice, ask yourself if this is someone else’s value that you’re ready to let go of. Of course it’s not always that simple to get rid of a long-held belief, but maybe it will start to free you up to see a broader range of options.

* Carl Rogers, the founder of humanistic psychology, described back in the 1960s how we ‘introject’ other influential people’s values and suggested that we need to ‘shed the shoulds and oughts’ to develop our personal value system.